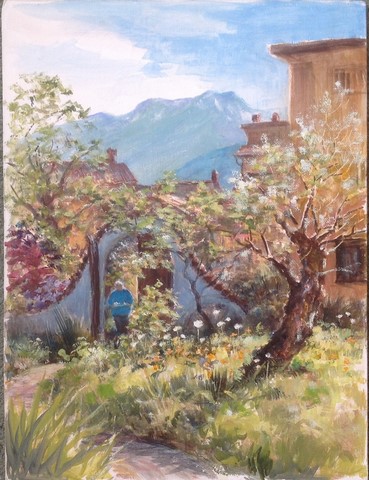 Clever Guests!
The garden arch with Hugh bringing the tea tray!
As most of you are aware, there is always a wonderful mix of artistic and creative talent here.  The absolute beginners learn quickly with a great learning curve (and many smiles) Those with some experience improve their art, learn new techniques and find ample inspiration from the surroundings here.
This year I have been so happy to have some professional artists who have made amazing interpretations of my wee house and garden.   And so I must share some of these with you. 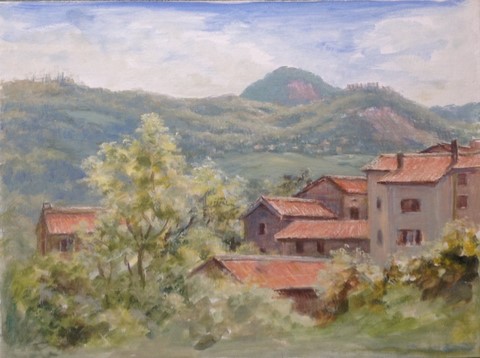 Eleanor Watt painted the paintings above sitting out in the garden, with her husband (teaboy) Hugh, dancing attendance on her creative spirit!   She is such an inspiration!  Below is some of her recent work and you can see more of her paintings on her web site     www.eleanorwatt.co.uk

Of course, I am proud of the work of all of my guests.   Really, every single person manages to push their boundaries and produce such a wide variety of styles and subjects in their artwork so I must apologise for only featuring a few here.   I am proud of you all!
Here are another couple of excellent paintings produced this year.   These are the work of Marion Younan, whose watercolour paintings are in miniature (no more than 7” high), with amazing attention to detail. 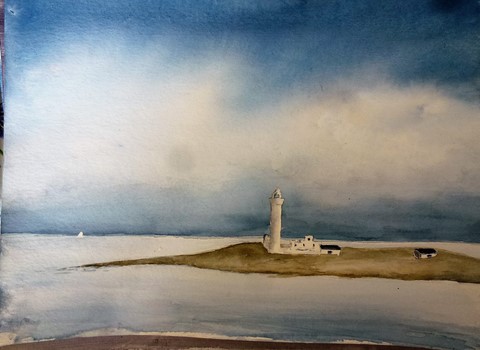 Another guest came here with a different story.  She had given up her job, rented out her house, and bought a 23-year-old camper van, with a view to setting out on a very different chapter of her life.   Yvonne had been here before as a beginner, and for this holiday, she had a specific aim.   She and her friend, a Dutch writer, intended to tour around the lighthouses of Scotland in the campervan ‘for as long as it takes’ and she wanted to learn how to paint the rugged Scottish coastal landscape.  The studio became almost like a production line as she mastered this tricky subject in both watercolours and acrylics.     Their blog is;     https://thelighthouseproject.blog   for more information about Scottish lighthouses, built by 5 generations of the Stevenson family from 1786,   there is this link; http://www.unc.edu/~rowlett/lighthouse/sctnw.htm

Well, I had a bit of an adventure this summer!   I went to visit some friends (Richard and Janet) and we were sitting in their lovely outdoor dining area within their wildlife garden when I felt an insect sting on my chin.  It began to swell and the swelling travelled to my mouth, and the skin all over my body became itchy.  Richard noted that I had turned ‘from pure white, to bright red, to puce grey’ and he and Janet rushed to find anti histamines.
Very quickly though, the conditioned worsened and I collapsed, coming round on the ground,  held up in Richard’s arms as he was holding me upright to keep my airways open while Janet phoned the emergency services.  The Croce Rosso ambulance arrived within minutes, even up the ½ km rough track to their house.  I was given first aid, for what was anaphylactic shock, and taken to the ambulance.  They drove me back down the rough track to where a beautiful shiny yellow helicopter had landed in a golden hayfield.

I must have been a bit delirious by this time as this image just seemed so beautiful.  Of course, I was in no state to take a photo, but the field was shining golden in the sunshine, and the big hay bales seemed to be arranged artfully around the helicopter. This was the doctor arriving.  I was given more treatment and then I was taken by ambulance to the local hospital in Castelnovo ne Monte where they waited until I had fully recovered before letting me home.  Therefore, I have so many people to be thankful for; Richard and Janet for their very quick actions, and the various medical services of my little mountain community were excellent.  They saved my life! 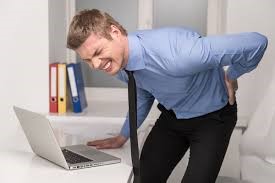 Well that was a Sunday and so we missed ‘pizza night’, but the following Sunday morning one of my guests phoned me (She was on the first floor and I was on the ground floor).   She could not get up!   She literally could not get out of bed.
I fetched a doctor who came immediately and prescribed her anti inflammatories and painkillers.   No pizza night again!   On the Monday, she still could not move and was in real pain.   I called another doctor and he diagnosed a problem with the sciatic nerve and gave her another prescription.   Well, the poor soul had to cancel her return flight and stay bed-bound for five days.  It was a serious condition, but the medical services here were excellent again – even though her European Health Card had expired in 2012!  And, she even had a visitor every day.
Well, we did joke that it was a very pleasant prison to be stuck in….
I am  hoping not to need any further medical assistance in the near future!!

Pheona does some art

Somehow, I rarely get time to do art myself, but need someone to ask me to do something.   So, I welcomed the opportunity to do these two commissions for the owners of a house which is on the ‘Sentiero Matilde’.  This is a long distance walking route, which follows the castles, towers and churches of the famous Countess Matilde di Canossa.  One of her symbols is the pomegranate.  An original fertility symbol and the seeds represent the blood of Christ.  In the mural below, there are two intertwining trees (male and female) with 11 pomegranates.  One is missing….   There is also a nice selection of fabulous birds.

The second painting is a copy of a portrait by Botticelli.  It could be the Countess… we don’t really know.  However, I have even further admiration of Botticelli whose attention to detail is immense.  Every hair is painted with a very fine brush… and you can see that he doesn’t exactly shirk from elaborate hairstyles!  In fact, I am sure that if you tried to assemble this hairstyle on a real person it would be impossible to keep it in place. (I learned that from trying to replicate the drapery on the head of the ‘Girl with the Pearl Earring’, which I found to be impossible! 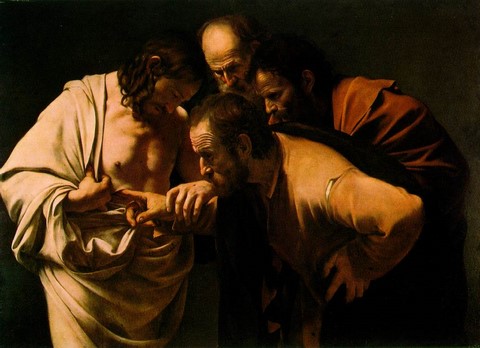 I have also started a copy of another Caravaggio painting which is called ‘The Incredulity of Saint Thomas’, c. 1601–1602.

It shows the episode that gave rise to the term "Doubting Thomas" which had been frequently represented in Christian art since at least the 5th century, and used to make a variety of theological points. According to St John's Gospel, Thomas the Apostle missed one of Jesus's appearances to the Apostles after His resurrection, and said "Unless I see the nail marks in his hands and put my finger where the nails were, and put my hand into his side, I will not believe it." John 20:25  A week later Jesus appeared and told Thomas to touch Him and stop doubting. Then Jesus said, "Because you have seen me, you have believed; blessed are those who have not seen and yet have believed." John 20:29   In the painting, Thomas's face shows surprise as Jesus holds his hand and guides it into the wound.] The absence of a halo emphasizes the corporeality of the risen Christ. The work is in chiaroscuro.  (Wikipedia) 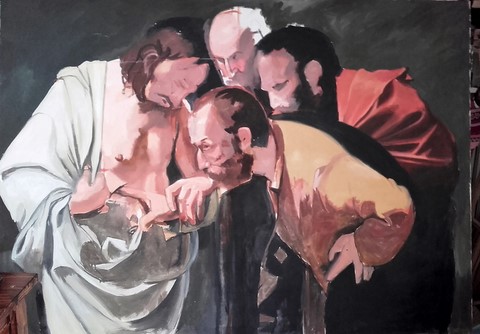 These paintings usually take at least a hundred hours so I have still some way to go, but here is the progress so far.  You can see how Caravaggio puts the four heads very close together so that all the drama is focused around the central area and we can see the four expressions well...It is so well orchestrated with beautiful spacings between each head.  The four hands also follow a fluid line and the hand of Thomas, is unnaturally long, (really long! I had to keep checking it!), to emphasise the subject of the painting.  I also like the way the head of Christ is in shadow, in fact, he looks rather beaten up with a broken nose and swollen lip.  No romantic image but a man whose hair is dirty and his face shows suffering.  Caravaggio himself was no stranger to being beaten up.  In contrast, the other three figures are portrayed in great detail. 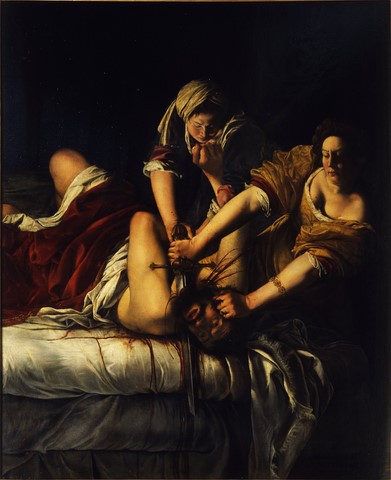 Then, for some reason, I decided to copy  the painting ‘Judith Slaying Holofernes’ which  is a painting by the Italian early Baroque artist Artemisia Gentileschi 1614–20.] This shows the scene of Judith beheading Holofernes, which was a common subject  in art since the early Renaissance.

There are two versions of Judith Beheading Holofernes. The drawing and painting plan is the same.
The subject takes an episode from the apocryphal Book of Judith in the Old Testament, which recounts the assassination of the Assyrian general Holofernes by the Israelite heroine Judith. The painting shows the moment when Judith, helped by her maidservant, beheads the general after he has fallen asleep drunk.
The painting is relentlessly physical, from the wide spurts of blood to the energy of the two women as they perform the act. The delicate face of the maid, who is younger than in most paintings, which is grasped by the oversized, muscular fist of Holofernes as he desperately struggles to survive, most finely represents the effort of the women’s struggle. Although the painting depicts a classic scene from the Bible, Gentileschi drew herself as Judith and her mentor Agostino Tassi, who was tried in court for her rape, as Holofernes. Gentileschi's biographer Mary Garrard famously proposed an autobiographical reading of the painting, stating that it functions as "a cathartic expression of the artist's private, and perhaps repressed, rage. (Wikipedia) 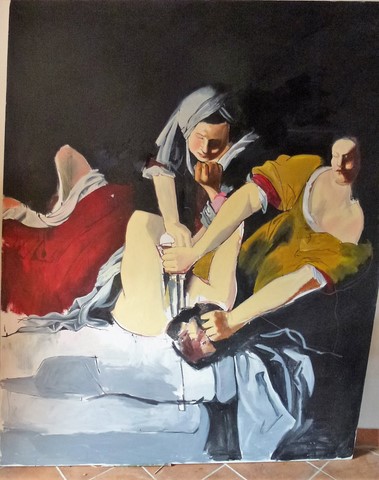 Once I started the drawing, I realised that, like Caravaggio, she manages to arrange all the drama with a simple and strong compositional arrangement of the picture space.  This is no photo or a copy of models as the strong geometry of the arms shows.   These arms are reminiscent of washerwomen, women kneading bread, fisherwomen and farmers.  The arms dominate the composition with the heads all being disproportionately small.  All the energy is with the pushing and pulling of the arms, and the sense of the battle of wills.  Just as in the Caravaggio, I had to check the size of the proportions in my own drawing.  Usually the height of a head is the same as a forearm, or an upper arm but not here! Judith’s head is particularly small.
I have not made much progress with this one and sometimes I ask myself which part of my subconscious chose to do it!  I started with the yellow dress version, forgot which one I was copying, and then had to change back.  I am now thinking I might do a combination of them both as I prefer Judith’s head in the blue-dress painting….   Who knows? 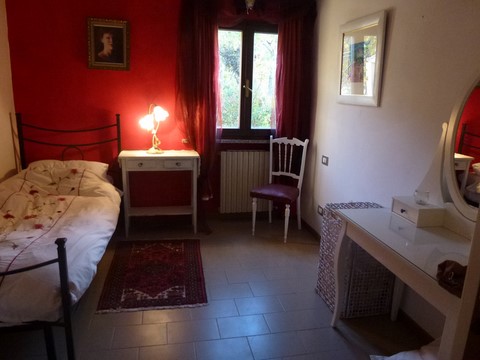 The ground floor is now available for guests.  This is usueful for people who fin stairs difficult.
There is a double room and a single room with a shared bathroom although you can book a room and ask for the bathroom for private use.